Pygmalion and Galatea: The power of 'BELIEF'! 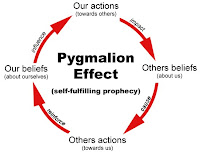 Pygmalion was a very talented sculptor in ancient Greece who loved his work, and would spend hours carving beautiful ivory statues, immersing himself in his art. One day, he chose a large, beautiful piece of ivory, and worked diligently at it, chiseling and hammering until he finished. It was a statue of a beautiful lady. Pygmalion thought it was so beautiful, he clothed the figure, gave it jewels, and named it Galatea (sleeping love). Pygmalion went to the temple of 'Aphrodite' (Venus), the goddess of love and beauty to pray for a wife just like the statue in his home.
When Aphrodite heard him, she went to the home of he sculptor to see what all the fuss was about. She was delighted when she saw Galatea. She thought it looked a lot like herself, so she brought it to life. When the sculptor returned home, he found Galatea alive, and threw himself at her feet. Galatea smiled down at him. They soon got married, and Pygmalion didn't forget to thank Aphrodite for his good fortune. He and Galatea brought gifts to her altar as long as they lived. Aphrodite blessed them with happiness and love in return.

The Pygmalion effect, or Rosenthal effect, is the phenomenon in which the greater the expectation placed upon people, often children or students and employees, the better they perform. The effect is named after Pygmalion, a play by George Bernard Shaw.
The Pygmalion effect is a form of self-fulfilling prophecy, and, in this respect, people will internalize their positive labels, and those with positive labels succeed accordingly. Within sociology, the effect is often cited with regard to education and social class.
Your expectations of people and their expectations of themselves are the key factors in how well people perform at work. Known as the Pygmalion effect and the Galatea effect, respectively, the power of expectations cannot be overestimated. These are the fundamental principles you can apply to performance expectations and potential performance improvement at work.

The Pygmalion effect was described by J. Sterling Livingston in the September/October, 1988 Harvard Business Review. "The way managers treat their subordinates is subtly influenced by what they expect of them," Livingston said in his article, Pygmalion in Management.

So what do I do to harness the Pygmalion effect?
Things you can do are for example:
• Encourage your employees to set innovative goals
• Praise creative efforts, even if they weren’t successful
• Stress the importance of the sharing of ideas among colleagues
• Be creative yourself – serve as a role model
• ‘Stand up’ for your employees innovative efforts
• Take pride in your employees achievements
• Publicly recognize innovative work
• Reward creativity properly

Just believing that one has the capability to be creative, one might become more motivated to pursue more unique or original ideas and solve a problem in a more creative way. Furthermore, it is thought that individuals with high self-beliefs about their capabilities to be creative use their cognitive resources in a more focused and effective way