February 05, 2013
HRx Analysts published the below data for the US , reflecting euphemistically that HR is a 47 year old white woman! Interesting but a brilliant report.http://hrxanalysts.com/
Ten of the 50 top compensated CHROs were women.  Ten.  That’s 20%.  And that’s down from 43% in 2011. 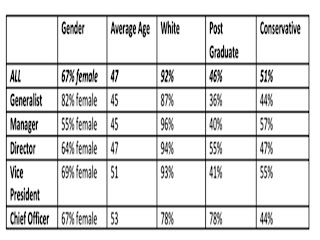 I always wondered why is HR more of women's game and why do I find more and more women in HR.
Great to know the origin of HR and it was really a woman's game to begin with.

Forbes cited HR Manager as a “best paying job for women” in 2011, with over 70 percent of the profession dominated by females. For year 2011, this percentage looks like quite imbalanced.

No wonder, within HR also, there are jobs for men, like the Industrial Relations Manager at factory, which works in all 3 shifts, HR Admin Manager, who manages attendance records, looks after canteen, transport and safety. Women still look like more suited for 'touchy-feel-y' roles.

I’m not denying there’s a reason HR is dominated by women. The profession has its roots in the welfare secretaries of the early 1900s, whose primary role was to ensure safety of the mill workers. Those positions were completely occupied by women and eventually evolved to caretaker, benefits and party-planning roles.

But HR today is different. Whether you love or hate your HR team, it can’t be a women-only game anymore. It’s gender, position, role and industry agnostic. Your business cannot be successful unless you can develop and manage talent—the crux of HR.
One of the firms called Evviva Brands, describes itself by saying “we put people on the balance sheet.” Infosys also puts Human Resources in their Balance Sheet on asset side. As an MBA, I love that sentiment. The idea of measuring the value of a company through talent isn’t new—McKinsey wrote about the metric of “profit per employee” in 2007. And the best venture capitalists know that valuation has to include both an assessment of the management team and the talent pool.
Call it people management, human capital, HR or whatever you want. Whatever it is, it’s not touchy feel-y or emotional. It’s a pure, balance sheet, analyst-watching, performance-driving business necessity. But if you leave it to your largely female HR team, or assume the ladies will take care of it, you’re not just mistaken, you’re in the red.