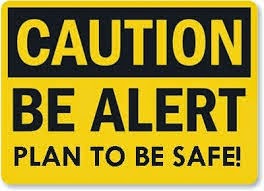 Unfortunate incident in the Parramatta park, Sydney at 9.30 pm on a Saturday, 7th March 2015 night, , a woman worker returning home after double shift at a 'desi' company, Mindtree, gets stabbed, dies..

IGNORING WARNINGS AND OBVIOUS SIGNS OF DANGER: WE ARE DESI!
Report says, her roommate had warned her several times not to take the isolated Parramatta park route to home but she did not listen. How come a lady dares to cross isolated park at 9.30 pm on a holiday (Saturday)? Does just being on mobile phone and talking all through help one save life and attack? No, it is just a psychological "hiding the fear" tool. It does not avert the danger.
MY MOBILE: MY PERSONAL BODYGUARD?
I see many girls and women on phone when they travel in public transport..This gives them a feeling that they are with someone they know, maybe virtually.  BUT that is the biggest risk that it becomes. You ignore the danger near and around you as you are so inwardly looking and turning a blind eye and deaf ear to surroundings. You actually isolate yourself. You actually appear like a sitting duck, oblivious of the danger around you. Attackers: animals or human attack when the prey loses touch and sensitivity connection with the surrounding.
Please stay away from continuously talk on phone when in public place, more so when passing through a risk zone of any kind. Too much glued to phone kills sensitivity to outer world and nearly all senses shrink to a device called phone. It is as risky as falling asleep while traveling short trips in a public transport.
COMPANY'S RESPONSIBILITY?
On double shift, on a weekend, returning home late and all alone. Did her employer 'Mindtree' bother to ensure safety?

"Indian techie Prabha Arun Kumar's murder not racially-linked: Sydney Police".
Jewellery intact. phone missing, . Did the attacker just come to attack and go. Only the whole phone call recording between Prabha and Arun, around her time from walking from the train station till she was attached in the park, will clear the scenario under which Prabha was attacked.  Racial attacks normally do not happen on an isolated and scared woman and that too without any provocation. Investigations will clear the picture.


"Australian cops release CCTV footage of Indian woman techie who was stabbed in Sydney"
In the video Prabha looks like walking fast as if she was running back to safety. No one looked like following her.

"'He Stabbed Me, Darling,' Indian Techie Killed in Sydney Told Husband on Phone".
Was her husband Arun aware that she walks through that risky and isolated route back home?